“Deep in the meadow, hidden far away / A cloak of leaves, a moonbeam ray. / Forget your woes and let your troubles lay, / And when it’s morning again, they’ll wash away. / Here it’s safe, here it’s warm. / Here the daisies guard you from every harm. / Here your dreams are sweet and tomorrow brings them true, / Here is the place where I love you.”

The first in a trilogy of novels written by Suzanne Collins‘ best-selling series, The Hunger Games is set in a dystopian future where, in order to maintain peace in the 12 districts of Panem, 24 young representatives are forced to compete in a televised game each year, where they must fight to the death until only one remains. With the film adaptation directed by Gary Ross, the story centres on the character of Katniss Everdeen (Jennifer Lawrence), a young woman living in the poorest of districts who, when her sister Primrose (Willow Shields) is chosen to compete in the games, volunteers herself as tribute alongside fellow district competitor Peeta (Josh Hutcherson).

Pitted against the richest of tributes, who have been training all their lives, Katniss is thrown into the colourful world of the rich in interviews with TV host Caeser Flickerman (Stanley Tucci), stylist Cinna (Lenny Kravitz), and Game escort Effie Trinket (Elizabeth Banks). But with only the mentoring skills of the drunk and bitter Haymitch (Woody Harrelson) to prepare her, does Katniss even stand a chance of returning home to her family? And how will seducing her district competitor in order to attract sponsors affect the harbouring romance she has with Gale (Liam Hemsworth) back at home?

The following post is a review of the film adaptation in comparison to the book. You can read my review of the book on its own here.

With the book being told from the perspective of Katniss, we get to see the story from other points of views in the film. We see more of Snow’s actions.

As for the transition on to screen itself. what Ross captures is almost exactly how I had pictured the story when reading it, which for me is the best part about his adaptation overall. Occasionally missing out explanations or further details that are sometimes needed, something which can be said for most adaptations and the reason as to why it’s worth reading the book beforehand, the film does an excellent job of filling in the audience with most of what Collins was trying to create through her words.

Because of Ross’ brilliant portrayal of this dystopian setting, he also manages to capture the darkness of the situation, whilst at the same time not making too ‘scary’ for the younger audience. With its premise of death and murder, it was inevitable that there was going to be a lot of violence, and it would have been extremely hard for Ross to dance around these subjects. Ultimately given a 12A rating after having seven seconds cut, we have to wonder what scenes were removed to make it acceptable for this younger audience. One technique that was used to help avoid any extreme violence was the use of a shaky camera, which overshadowed any killings, taking away the emphasis of anything too serious and instead focusing on the confrontation itself.

Of course, whilst this made the film easier to watch for the younger audience, for the rest of us it did occasionally ruin the moment. But even without gore and the visual image of spears going through people, the film doesn’t flower the themes of death either. The scene with Rue (Amandla Stenberg), especially, was quite a big part of the novel that couldn’t have been easily ignored. Whilst at times a bit of blood would have emphasised these death scenes even more, it wasn’t a complete negative on the film as the violence was still enough to have an impact.

As for the cast of the film, it is all about Jennifer Lawrence, of course. Not only did she fit into the role perfectly, but she played the character almost flawlessly and held a strong performance throughout. Helped by the fact that her character is one of inspiration, Lawrence is indefinitely going to do well from this. But whilst she was the star of the show, the film also held many other great performances. One of my personal favourites was Stanley Tucci‘s Flickerman, who, with his shiny white grin and bright blue hair, was just what the role called for. Provoking laughter and cheers from the audience of his TV show, he did the same with the cinema audience too. And let’s not forget Woody Harrelson and Elizabeth Banks as well, who were both great additions to the cast and again suited to their characters superbly.

Whilst The Hunger Games is a brilliant adaptation, the one thing I felt that wasn’t expressed overly well was the romantic connection between Katniss and Peeta. Whilst some of the audience may have felt that their relationship was a genuine one, the book puts it very differently. Katniss’ actions were, for the most of it, for the cameras, which in the book Peeta eventually realises. With Katniss narrating the book, we are able to understand this better, but whilst the film picks up on most of what was left unsaid in Collins’ novel, the emphasis on Katniss’ thoughts of Gale weren’t easily expressed on-screen.

What I did like about the end, however, was that the film very slightly went into the second book. From reading the first book we are left to guess what will happen next, knowing that Katniss must be punished somehow to fill another two books, but the film makes it certain that President Snow (Donald Sutherland) is determined to retain his power and that he isn’t going to let Katniss’ actions slip. This both tied the film up brilliantly and also made it clear that more is to come, and that we certainly have a lot to look forward to. 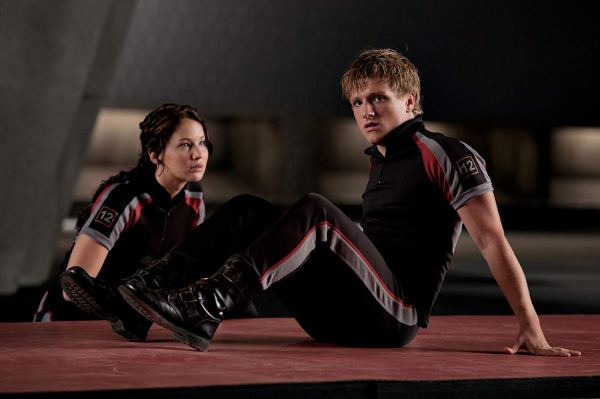 Differences From The Book:

Here’s a list of the differences from the film compared to the book in chronological order:

If there’s one thing that we can all agree on, it’s that Gary Ross knows how to adapt a novel onto the big screen.

Despite the only major flaw of a shaky camera, The Hunger Games is brilliant from start to end, and I really would recommend it to anybody looking for a new franchise to fall in love with.