“And then like Pandora, opening the great big box of the world and not being afraid, not even caring whether what’s inside is good or bad. Because it’s both. Everything is always both. But you have to open it to find that out.”

Written by M.R. Carey, based on his Edgar Award-winning short story, Iphigenia In Aulis, and originally published in 2014, The Girl with All the Gifts is a set in a dystopian future in which most of humanity is wiped out by a mutated fungal infection that eradicates free will and turns its victims into flesh-eating “hungries”.

Set at an army base in rural England, a small group of children, who appear to be immune to the disease’s effects, retaining normal thoughts and emotions, are being studied by the ruthless biologist Dr Caldwell. Spending their days in a classroom, taught by the empathetic Miss Justineau and guarded by the ever-watchful Sergeant Parks, the story centres on a particularly special young girl, Melanie. Melanie excels in the classroom and loves each day she gets to spend with her favourite teacher Miss Justineau. But when base falls, Melanie escapes along with Miss Justineau, Sergeant Parks, Pvt. Kieran Gallagher, and Dr Caldwell, and must discover what she really is to ultimately decide both her own future and that of the whole human race.

Set to be released on 23rd September, the film adaptation is directed by Colm McCarthy and stars Sennia Nanua in the lead role of Melanie, Gemma Arterton as Helen Justineau, Glenn Close as Caroline Caldwell, and Paddy Considine as Sergeant Parks.

The following post is a review of the book only, looking at how it is going to be adapted. You can read my review of the film adaptation in comparison to the book soon.

We all love zombie films and stories, but handling the genre successfully is another matter. It’s hard to find a new spin on such popular genres these days when premises around zombies, vampires, and dystopian futures (to name a few) are so largely recycled. But that’s exactly what The Girl with All the Gifts manages to do.

Quite ambiguous in its premise at the start, it takes the story a while to open up for us to really understand what kind of future we are a part of and whose side we should be taking. What The Girl with All the Gifts does differently is that we don’t know whether our central character is a protagonist or antagonist, and the world could very easily come to an end at any point.

Where do our alliances fall? Would the end of the world really be the best thing for our fallen civilisation? Or should we feel obliged to stand up for humanity anyway?

Not only is The Girl with All the Gifts a terrifying dystopian future, but it makes you question what you would do if you were to find yourself in a similarly life-threatening situation. And then it even makes you reevaluate that.

Often I found myself thinking that I should be on the side of Dr Caldwell and her team of scientists, wanting to find a cure to this bizarre disease and save humanity. But that’s hard to do when the character you find yourself closest to is a young, naive girl who loves learning and reading, but who may also be the enemy. Then again, she may also be the only person who can save the world, even if that means going against everything you have believed to be right.

With four very different main characters, you find yourself siding with each of them at one point or another, which is what makes this book such a gripping read. Not only is there a lot of action and gore, with numerous twists in plot to keep you guessing how it’s going to progress, but it’s these characters that will make you think that maybe the end of the world could be an experience worth having, and their human qualities that give such a personal touch to a premise we know all too well.

The book does start off a little awkwardly, as we become aware of some kind of relationship forming between Melanie and Miss Justineau, which I didn’t know what to think of at first. Melanie often confesses her love for Miss Justineau, but it’s difficult to understand what kind of emotions Melanie is feeling since we’re not really sure who or what she is at this point in time, or whether she can feel emotions like love at all. The context of her background and their relationship is yet to be filled in, so Melanie’s desperation does come across uncomfortably in these opening chapters, but it doesn’t take long for this confusing relationship to become clearer, as we see more of their mother/daughter relationship blossom.

But, whilst the central character is a young girl and there are some young adult themes in place with Melanie trying to discover who she is, there’s also a lot of maturity in Carey’s writing and in the way he describes certain situations. There are numerous moments that hit quite hard which make you think “Oh wait, maybe this isn’t a story for younger readers”, with the use of swearing, gory detail, and sexual references, and it’s these short and infrequent breaks in regularity that keep the suspense high.

The story even details this zombie outbreak in a way that makes it almost seem possible, detailing a mutant version of the fungus Ophiocordyceps unilateralis — the parasite behind “zombie ants”. If that’s not enough to scare you a little, then reading about how this disease so easily infected the whole world may conjure up some scary images for you.

Don’t let the central character’s age fool you, because this is very easily a story that could haunt younger readers, and I really hope that the film adaptation heightens this sense of fear and uses a lot, a lot of blood and guts. If you like zombie films then this is definitely one to look forward to. 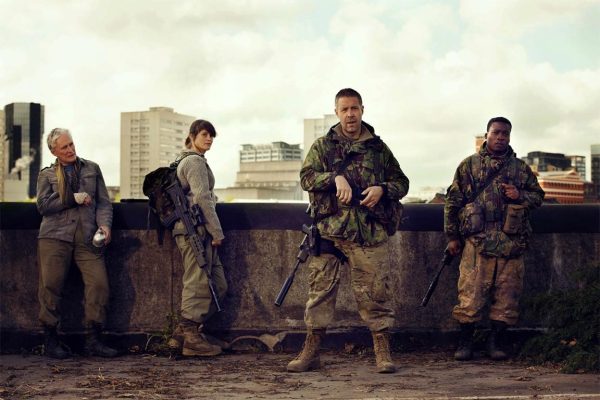 The film is set to be directed by Colm McCarthy, who is mostly known for his work with TV series. Serving as his second feature-length film, after the largely unknown horror Outcast (2010), McCarthy is most recently known for directing six episodes of Peaky Blinders, as well as a number of episodes for TV programmes including Sherlock, Endeavour, Doctor Who, and Ripper Street.

I’m yet to see any of his work, so I don’t know how he will handle this adaptation, but it looks very promising for the trailer, which you can watch below.

This kind of alterations can often cause some unnecessarily controversial opinions being thrown around for book lovers, and it may agitate some fans who have found themselves relating to these characters on more of an emotional level (think about the controversy around the casting of Rue in The Hunger Games), but, personally, I think the casting still works incredibly well, and the producers have ensured that they won’t come under conflict for white-washing the adaptation by making numerous changes towards the ethnicities of its characters. Let’s just hope that this isn’t made into a bigger deal than it needs to be, as it sadly often is.

So, with these differences from the book in consideration, our leading character, Melanie, is set to be played by Sennia Nanua. This will be the upcoming stars first major role in a feature-length film, known only for a role in the short film, Beverley. Despite visual differences from the book’s character, Nanua looks superb in the role, as if she will draw us into the story exactly as Melanie does in the book.

Gemma Arterton will then play Miss Helen Justineau, who gave a brilliant performance in the vampire horror Byzantium, and is also known for roles in films including Quantum of Solace, Hansel & Gretel: Witch Hunters, Prince of Persia: The Sands of Time, and Clash of the Titans. Although, again, Arterton is very visually different from how Miss Justineau was described in the book, she has many other characteristics that will suit the role perfectly. She’s such a great actress who is easy to enjoy, so I look forward to having her involved.

As for Dr Caroline Caldwell, Glenn Close will be taking charge. Famously known for her role in Fatal Attraction, as well as films including Dangerous Liaisons, 101 Dalmations, Albert Nobbs and, most recently, Guardians of The Galaxy, there couldn’t be anyone better suited for this role than Close. She’s a phenomenally classic actress, and it’s going to be amazing to see her in a role that we’ve not seen her in before.

Paddy Considine will then be playing Sgt. Eddie Parks, which is one of my favourite castings for this adaptation. Known for roles most recently in Miss You Already, Macbeth, and Child 44, Considine is also known for his performances in The Cornetto Trilogy’s The World’s End and Hot Fuzz, as well as the indie films Submarine and Now Is Good. He’s an actor I always want to see more from, so I’m really looking forward to his role in this.

And finally, Fisayo Akinade, who you might recognise from Channel 4’s series Cucumber, will play Pvt. Kieran Gallagher, Anamaria Marinca will play Dr Selkirk, Dominique Tipper as Devani, and Anthony Welsh as Dillon.

The Girl With All The Gifts is set to be released in cinemas on 23rd September.