“Why is it that everyone can forget about physical ailments quite easily, but when it comes to mental illness, it sticks to you like glue for the rest of your life? Everyone remembers your difficult time in glorious Technicolor, and it lives on, rearing its ugly head periodically just to remind you that even the people nearest and dearest are forever on full alert for any signs of a relapse.”

Written by K. L. Slater and released in April 2020, The Apartment follows Freya Miller, a widowed mother who’s struggling in the fallout of her husband’s betrayal, who’s offered an opportunity she can’t refuse. Adrift and alone, she’s on the verge of despair until a chance meeting with the charismatic Dr Marsden changes everything. He’s seeking a new tenant for a shockingly affordable flat in a fashionable area of London. Adder House sounds too good to be true, but Freya really can’t afford to be cynical, and Dr Marsden is adamant that she and Skye will be a perfect fit with the other residents. But was it really chance that led her here, or something unthinkably dark?

At only 266 pages long, The Apartment is a thriller that you will breeze through. With a brilliant concept and intriguing opening chapter, it’s definitely a book with a lot of potential. But with an unsatisfying ending and a lot of loose ends, I can’t help but feel underwhelmed.

As the book begins to effectively explore themes of mental illness to set up its potentially unreliable narrator, which Slater does with good understanding, it quickly becomes apparent that there is little substance behind this frequently-used plot device. Freya has had a difficult upbringing which is often referred to, as everyone around her is constantly worried that she is too stressed. But nothing comes of the details of her troubled past.

While we are constantly reminded that she’s had it tough, I couldn’t feel the pressure that she was supposed to be under with so many disturbing things going on around her. In the end, the comments about her mental stability are only made to make you question whether she is having another breakdown or not, and because the book is so short, the development isn’t there to explore her mindset comprehensively enough.

Despite the apparent battles going on in her head, Freya is also made to come across as an intelligent woman with a tough exterior. Yet she puts herself into this situation by trusting too easily and often convinces herself to ignore her instincts, which all seems like a contradiction.

It’s a difficult story to fully engage with because you know that the residents of Adder House are involved in Freya’s problems in some way, so there aren’t many likeable characters to connect with. Even Freya is hard to relate to. When she reluctantly lets her daughter have a handful of crisps against her better judgement, my eyes rolled. But I got past that. The story was intriguing enough so I wanted to keep reading.

However, my main problem with the story is the lack of atmosphere. Adder House is not a nice place, but I didn’t feel any of Freya’s fear or the sinisterness of what she was going through. Although she hears crying, sees swarms of flies, notices things moving around the house–all qualities of a classic horror film–it just doesn’t feel scary.

While it has the plot of a psychological thriller, the story itself doesn’t mess with your head enough. There’s a chilling twist, for sure, but it could have been so much darker. A story like this needs to make you scared of reading it in the dark, but the tension wasn’t there for me. Slater seems to shy away from the brutality of the actions of those involved at the end, but what these people did was messed up and that darkness needed to be made the most of.

There’s also a lot left unanswered. I wanted to know more about Freya’s husband and what happened to him, about whether or not his death was linked to the final revelations or not. His death was built up as if it were going to be significant in some way, but we get no explanation for it. I also wanted to know why the details of his affair were relevant. Were they just to give us another potential suspect? And what was the point in the revelation about the Marsdens and the mystery man in their house? Was it all just to put us on the wrong track?

Most of all, I wanted there to be at least another chapter or two after we finally found out what was going on. It wasn’t until the 95% mark that something actually happened, and by then you knew that there wasn’t going to be enough time for it to be rounded up very well.

There were so many points that didn’t come to anything in the end that I was simply left wanting more. There was no in-depth detail, no intensity, no long-lasting effect of the horrible situation that Freya had been put through. There was so much that I was keeping an eye on to see what came of them (like Freya randomly falling asleep), but there was so little explanation in the end that it failed to shock.

There wasn’t enough left to keep you guessing, either, as there was really only one way for the story to go. The subplot of the diary and what happened to baby Albert could have been weaved into the plot much better. It felt randomly pasted into wherever there was room for it which disrupted the flow of the story. And because it felt so misplaced, you knew that it must be directly related to Freya. Without anything left to piece together, the lack of context lost any sense of mystery.

There were still a few exciting twists regarding the who and why which was a really interesting turning point, but the ending happens so fast that the build-up falls flat. Slater just doesn’t take the time to make the most of these final scenes, when the twist could have been used to a much better effect.

I feel bad for picking out so many flaws in Slater’s story, but it’s because the foundations are great. The Apartment attempts a lot of strong thriller traits and you can see that it has good intentions, but it just fails to deliver with a good enough impact. 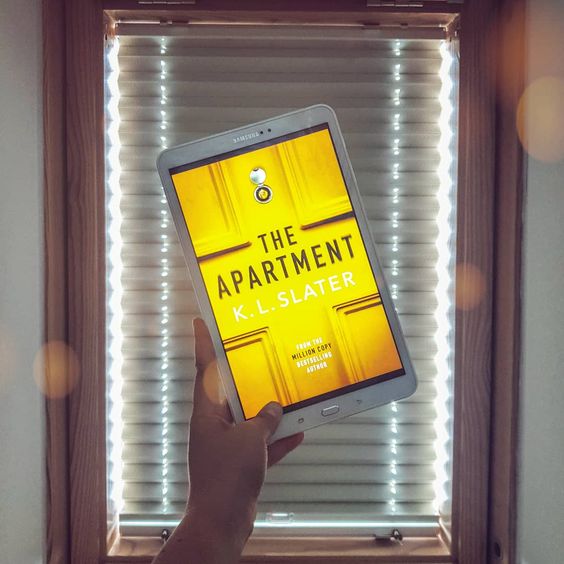