“When people are part of a mob, they stop being individuals, their inhibitions disappear, they don’t follow their normal moral compass… When they’re surrounded by like-minded people, they don’t see themselves as violent individuals, it’s the group that’s responsible for the violence, not them personally.”

Written by John Marrs and published in 2019, The Passengers is set in a dystopian future where self-driving cars are becoming the norm. Soon, all of England’s manual vehicles will be banned as roads will become a completely autonomous network. Some have their concerns, but it’s not until the day that Libby is forced to attend jury duty that the trust in artificial intelligence becomes painstakingly clear, when someone hacks into the systems of eight self-drive cars and sets their passengers on a fatal collision course. The passengers include a TV star, a pregnant young woman, a disabled war hero, an abused wife fleeing her husband, an illegal immigrant, a suicidal man, and a husband and wife who are travelling in separate vehicles. Now, the public has to judge who should survive. But are the passengers all that they first seem?

This is the second book I have read by John Marrs after absolutely loving What Lies Between Us, and he’s done it again with this high adrenaline, fast-paced and immensely enjoyable thriller that I did not want to stop reading.

Set in a future with a slight dystopian twist, Marrs crafts his setting brilliantly. Using thumbnails of blog posts, newspaper articles, and search engine results to begin each chapter, he provides insight into this new era without having to give too much heavy detail. While doing so, he also explores many different issues that are important to our modern world, looking out how we use technology to make our lives easier but also appear better, how we use our morals in drastic situations but how easily we can get caught up in mob-culture, and the importance of action over words when you want to stand up for something you strongly believe in.

With the concept of having eight characters whose lives are in your hands, I was immediately drawn into the premise. But when the action is so impacting at the start, I was worried it wouldn’t live up to its own hype. If the hacker is telling the truth about his intentions to kill innocent people merely to prove a point, how would such a dark storyline about a reckless act of terror be classed as entertaining? But if the hacker is lying, how would Marrs make up for this without readers being left disappointed?

Of course, there was never any need to worry, as Marrs isn’t one to disappoint. I knew to not expect things to be so straight forward, but he always goes further than my expectations and does an impeccable job of delivering a twisty thriller with every angle thought out. To say that it keeps you on your toes would be an understatement, as Marrs keeps your heart pounding and your jaw in a constantly dropped position.

What I love about Marrs most of all is that he is great for a cliffhanger, and yet again he manages to fit one into almost every chapter. This is a book that needs you to decide whether you like a character or not in a short amount of time, as you play the jury alongside the other characters. But just when you think you know someone, Marrs throws in another curveball through the hacker’s narration. He also includes a great variety of characters from different backgrounds and classes and tackles some important prejudices along the way.

And just to impress me even more, Marrs pays super close attention to detail. So many times I’ve read thrillers where characters hint at the bigger picture to tease readers about what’s to come, but such comments are often ignored by the characters themselves, leaving me thinking, “Why aren’t they asking more into that?” But Marrs makes certain that his characters are paying attention. A few things are said that aren’t picked up on straight away, but he comes back to all of these points a few chapters later, acknowledging where he has implied certain revelations to keep the tension building with great momentum. 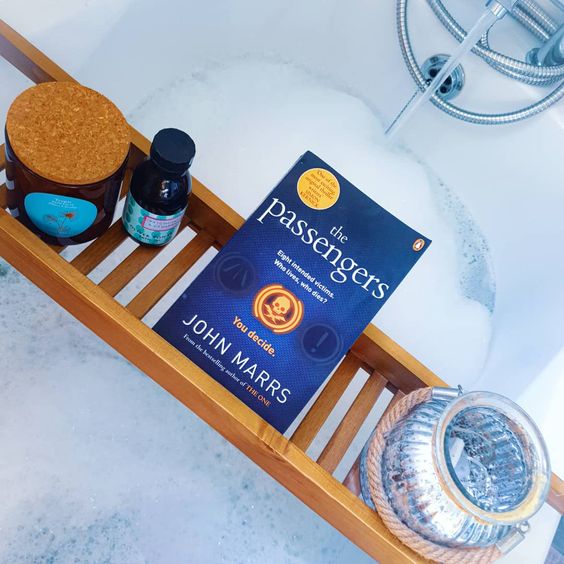